So much of writing is about writing, until the writer finds her subject.

For most of my life, my father has been my subject, a premise to which this blog attests. He takes up an enormous amount of space in my consciousness, always has. Now that he's dead, I'll bet he takes up even more.

His number one desire, at least the one he projected to me, was to live a meaningful life. Meaningful to himself, yes, but more importantly meaningful to others. More importantly to him. Or, I don't know....I used to think the latter was more important to him; i.e., the image he portrayed to others. And can we talk about his image for just one second? -- he reveled in it. This portrait of him, done by his Russian painter friend Alexi, occupied the space right beneath the ancestral portrait of Don Juan Forster, hanging above the fireplace. 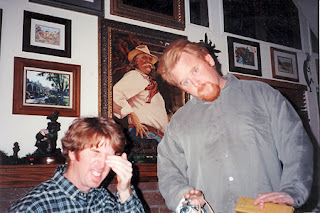 As you can see by my brother's expressions, we all have our interpretations of my dad's image.

I propose that I hardly knew my father. I only knew him as a dad. Towards the latter part of his life, I was able to see him more as a human being, with parents and children, a man with 100,000 desires, living his best to sate every last one of them before his death.

He was not modest.

But he was honest. That is something I know we all can be proud of about my father. It's a gift to know that no matter the faults of the parent, that same parent is a human being, perfectly flawed because that is the number one condition of "being human." Yet even with the flaw, the parent earns his children's honor.

My father-in-law and I today talked about Coleridge, about Fancy, and threw lines from poems of ours back and forth with one another while sitting on his kitchen floor, with Diego and Clara circling the kitchen table. How perfect that the one thing I could NEVER talk to my father about -- my poetry; for reasons I can only begin to iron out -- is one of the deepest connections I have with my father-in-law: we are both writers, poets primarily. My father-in-law liked my line about "the small wings of speech" from my poem "Chaos Theories". I liked his line from the poem he's working on currently, "So I begin in memory, twisting scraps of [...] into facts" or something near to that.

We talked about how neither of us has read the entire Biographia Literaria, how both of us were obsessed with Coleridge at one point, still are in ways differently than we were before. I explained how I choose a genre in which to write: blog entries are about turning the daily into the daily bread. Fiction is about crafting art from an experience that seems ripe with symbolism. Poetry is about turning to the ether, pulling something from it, and through the imagination, creating something "Fanciful" from the sheer air: A rarity of the imagination, so rare that it makes the indecipherable plain. Poetry clears the mind's eye with all its glorious confusion. And there are no resolutions in poetry, only pauses.

There is a poem of mine that sits in my father's guest bedroom on the floor. It was never hung up on his wall, never fully committed to by either of us. Nevertheless, he'd surprised me with it Christmas 1994, secretly commissioning it through my boyfriend Charlie. Christmas day when I opened up the present in my father's living room, saw this 2'x3' frame of my poem "Mexican Hibiscus" calligraphied on parchment, I gagged. "I thought you'd like to hang that on your wall," he said.

"As if," I thought, choking on my own words as I re-read them silently in front of everyone else around the Christmas tree; the poem was broadcast, you might say.

My father's gesture horrified me at the time: Now I understand the gesture a little more. It was his way of saying "I care," although he honestly didn't care enough to hang it next to his portrait. Of course, I would not have expected him to hang it there. I couldn't hang it in my house, how could I expect him to hang it in his?

His message, as I see it now was "do it yourself." That is, if you want to write poetry that is admired, you have to admire it yourself first. I can trust that message. I've learned it's true over time.
Posted by Christa M. Forster at 7:24 PM

I had to read this twice before I realized you meant 3' x 5' framed poem. Of yours. That you would not hang in your house. In person, you would have gesticulated. You wrote it correctly, however, without undue emphasis on the size.

I recently ran into David Brown in a series called Grand Piano, An Experiment in Collective Autobiography, San Francisco 1975-1980, part 1, (mode A) in a section by Carla Harryman.

Hi, Christa - this is not relative to this blog, but...

Please check out www.womenswallstreet.com and let me know what you think of it as a source of financial advice/help for women 18-59. I am an investor in it and you representative of the demographic we want to reach and attract. My email is: tommymm@mac.com