The Body is the Servant of the Mind 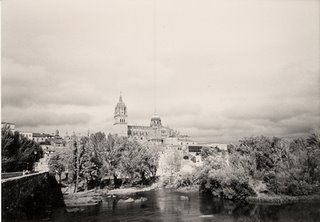 I lived in Spain from 1986 to 1987. This period was another time in my history when I almost died. In Spain, though not especially because of Spain, or at least I don't think so, I suffered from extremely high fevers (another head malady), specifically fevers that reached 106.9.

The reason....There was no reason. Another medical mystery. The discharge record from the University de Salamanca Medical Clinic said "virus," because the doctors had no name for the reason. It wasn't TB, wasn't Rheumatic Fever, wasn't HIV, wasn't anything. The doctors didn't say "psychosomatic," but other people said it.

The Spanish family I lived with in the manzana named "Calle de Espiritu" would sit around the comida (late lunch) and bemoan how I'd been so beautiful when I first arrived in Spain for the AIFS exchange student program (pronounced eyefsss by the Spaniards), but how I'd become so ugly in the interim. Physically ugly. I had collapsed into unconsciousness several times during a University class -- once in Spainish economics and once in Literatura del Siglo Oro (The Golden Age). On those times that I blacked out in class, I was carried out of the classroom by my friend Angel, the Spanish student with whom I had an intercambio (a conversation where I practiced my Spanish and he practiced his English). Angel put me in a taxi and rode home to Calle de Espiritu with me, carried me from the taxi into the elevator, and then to the doorway of my apartment on Piso 7.

I was ugly because I was homesick for the United States, America, my mom. While in Salamanca, I wrote my mother's mother several letters thanking her for giving birth to her daughter, my mother. I was singularly depressed. The fevers probably were the manifestation of my depression, which was hot, not cold.

In addition, I was anorexic: I hadn't had a period for nine months. (!).

In truth, I woke up in Spain. I woke up to the reality that the body is the servant of the mind. I remember waking up one morning in the hospital, the one I'd been a prisoner of for nine days with a brain-damaging fever and a diagnosis of "muy mysteriosa." I could see the day outside from a small window in the far corner of my room. Through that window it was violently fall. Autumn in every shimmer of light, every shadow's hue. It was screamingly beautiful, not the least because there I was stuck inside, away from it all, relegated to a hospital bed, my roommate an old woman dripping black bile from her stomach into a plastic bag hanging below the sheet line.

While looking through the window at the glorious day I was missing, I realized that I didn't want to miss any more days like the one I could see through my window. Within hours of this revelation, I was discharged from the hospital. It wasn't a coincidence; only hours before the doctors had told my parents (by phone) to fly to Spain because I was probably going to die there.

The body is the servant of the mind. I forget this a lot, but it's true. "Nothing is good or bad but thinking makes it so," says Shakespeare. If I think I'm ill, then I'm ill. If I think I'm not, then I'm not.
Posted by Christa M. Forster at 8:27 PM