When I turned 16, my dad gave me my first car: a 1965 Ford Ranchero. It had been the delivery truck for the NAPA Auto Parts store he owned with his brother. When he came home one afternoon and told me my new car was in the driveway, I nearly broke my leg running outside.

I don't know what I was expecting, but I certainly wasn't expecting a canary yellow truck with fat racing stripes running down the bed, and a giant, plastic NAPA hat perched atop the cab. When I saw it, I started crying.

"What's the matter?" my dad said, acting all surprised.

"Is that really it?" I said. I imagined the laughter that would follow me in and out of the parking lot of Capistrano Valley High School.

"Everyone will laugh at me," I said. Tears welled up in my eyes.


In the end, he had the truck redone for me, the body painted cobalt blue, the cab white. He redid the interior, too. After I left for college, my brother Marco drove it.

My dad named the car Blue Thunder, because, he said, we were always storming around town in it. In truth, it was probably the coolest car in my high school parking lot, although I didn't know it at the time. 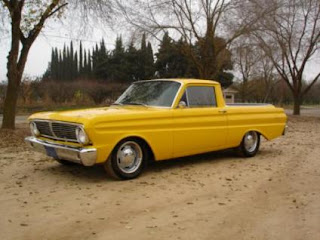 Oh man, that car is still cool! I'm so glad your blogging again.