David and I went to the Opera Ball After Party Saturday night. Honestly, I was dreading it, but it turned out that we had a lot of fun. We bumped into our old friend George O. Jackson and his sigother, Marjorie (aka Buzzy). We haven't seen them in forever -- they live in Austin. They were our refuge during Hurrican Rita, the safe haven we were headed toward but didn't make it to. Although we ended up safe enough in Katy at the Kayser's, a happening which was one of the most delightful and generous surprises we've had as a family.

At the Opera Ball After Party, David and our friend Mark Yzaguirre were being honored for their community service along with a handful of other "young Houstonians who make a difference in Houston." Mark has been the president of Aurora Picture Show for the past several years, and David created Spacetaker.

After we'd been there for 25 minutes, David left to go to the bathroom and Mark, his wife Katherine, and I started talking about the upcoming IBP Gala, whose theme is the Tortured Artist Gala. We talked about who we'd go as. I said maybe I'd go as Camille Claudel. Claudel was a significant French sculptor who just happened to be Rodin's lover. I could also go as myself.

While we discussed it, I suddenly felt this energy push me forward. I thought I heard Mark say, "turn around," even though he denied he actually said this. I turned and saw Lynn Wyatt standing behind me, with four young men flanking her on either side. I felt like I was breaking the law by obstructing her view to the dance floor, so I moved off to the side. Like it was choreographed, everyone else also moved out of her way, clearing for her a path to the dance floor. She wasn't gonna dance, I don't think. She didn't look any of us in the eye, but she did keep this friendly smile on her face. It was as if she were royalty, and I guess that if Houston had a queen, she'd be it. I felt totally ridiculous standing there, looking at her. But I couldn't stop looking at her, and you know what -- she is a professional-being-looked-at person. Clearly, she has staked her fame on being looked at; she was unflappable. I completely flapped and had to leave the tent to go to the bathroom. 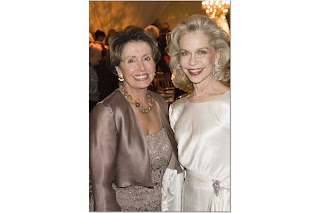 cake said...
This comment has been removed by a blog administrator.
3:04 PM

not sure if i can post this link correctly...but i looked her up on google and found this national geographic article about her.

Thanks, Cake. I linked it.